Create an Account - Increase your productivity, customize your experience, and engage in information you care about.

The Village of Saukville sprang up at a point where the principal north/south Indian trail in Wisconsin crossed the Milwaukee River. Prior to the 1830's the Menomonee Indians inhabited this area. However, it was not until 1832 when the government blazed (surveyed) two military roads that crossed here in Saukville that present day settlement patterns began to emerge. Both roads had been original Indian trails. The Dekora Road, presently Highway 33, extended from the Wisconsin River just south of Portage to Port Washington. The Sauk Trail or Green Bay Trail extended from Chicago to Green Bay. These roads helped to create an avenue for migration. 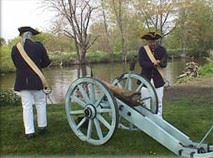 On August 10, 1835, William Payne obtained the first record of land ownership sold by the United States Government here in Saukville. Moreover, Payne constructed the first commercial building called the Payne Hotel in 1847, which still stands today and is located on the corner of East Green Bay Avenue and Ulao Road.

In 1836, William Payne sold some of his land to Soloman Juneau, one of the founders of the City of Milwaukee. Juneau, a significant individual to this area, was the first successful Indian Agent for the federal government. His job as an Indian agent was to handle the Indian concerns of the state. The Indians loved and respected Juneau, therefore, making it easier for settlers to establish their homesteads.

George Daniels, was the first to build a house in Saukville in 1846, and had given Port Washington its name in 1843. Two years after Daniels built his house; enough other people inhabited the Saukville area that in 1848 the Township of Saukville was created. That same year the State of Wisconsin established an immigration office in New York that promoted population growth in Wisconsin and Saukville. From the years 1848 through 1853, Saukville had grown to a population of 250.

Between the time period of the 1850's to the 1870's began the foundation for the future development of Saukville. The first church was built in 1858, in 1870 the Milwaukee and Northern Railroad was built through the village, and in 1873 a new wooden bridge was built over the Milwaukee River that helped transportation cross the river more efficiently. In addition, the Fire Department was established in 1886.

Today, Saukville is one of the fastest growing communities in Ozaukee County and has a thriving and rapidly growing industrial and commercial base. Welcome to our community.
Notify Me®
Pay Water Bill
Video Tourbook
Newsletter Sign-up
GIS
[]